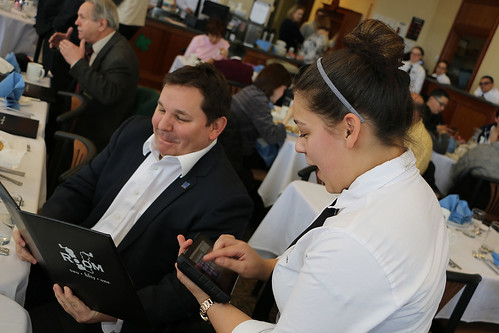 Diman’s Room 251 restaurant has gone high-tech with some help from friends of the school. Already known for its cutting-edge culinary techniques, Room 251 has recently started using the latest technology to manage orders and facilitate communication between the kitchen and front of the house.

The POSitouch system cost nearly $30,000 and was purchased with assistance from the Diman Bengal Education Foundation ($10,000) and the William Fusaro Scholarship Fund ($7,500), with the remainder being paid by Diman.

When students use the new system to take an order from a customer, they use a tablet or desktop computer to record the choices and, if necessary, requested pickup time. The system then alerts the kitchen staff through a pair of monitors and a printed ticket, and they subsequently prepare the meal. Once completed, they switch a setting on the order and the serving staff is alerted that the meal is ready.“This is so much easier for our kids,” said Culinary Arts Department Head Randy Benevides. “The order pops up 10 minutes before it’s due, so folks can order early and have their meals ready when they want it to be ready. There’s no issue with lost tickets.”

But the benefits go beyond easy ordering and preparation of food. “We can keep track of all the orders and run reports,” explained Benevides. “We can see all kinds of information, like how long it takes to prepare certain dishes, how many sales we get of different types of menu items, when our busiest times are, how we’re doing over time, and on and on. It’s great!”

Restaurant visitors are noticing. “The students are walking around with their tablets and taking orders and I think it’s fantastic,” said Steve Souza, member of the Fusaro Scholarship Fund and the DBEF Board of Directors. “I’m very enthused about it, and am thrilled that we were able to help out in some small way.”

Souza explained the scholarship fund got involved. “Billy Fusaro was my best friend and was on the Diman school committee. We heard about the project and had some funds, so we talked to Ed Hill, who said the DBEF was going to chip in and the school was going to chip in, so we decided to step in too,” he grinned. “It’s like a three-legged stool.”

This is the fifth project completed with assistance by the DBEF, as they previously funded or helped fund the Stanley Remiesiewicz Customer Service Center in the Automotive Technology shop, a physics lab remodeling, a safe saw for the housebuilding program, and the building of a sports equipment storage facility.

“It’s wonderful that the foundation gives people an opportunity to give back to Diman,” said Carl Sawejko, 1st Vice President of the DBEF. “The foundation gave them a mechanism to support Diman in a manner that wasn’t available to them previously. They can give back to their school, the one that helped set them, or their family, up for life.”

DBEF Secretary/Assistant Treasurer Ed Hill pointed out another advantage of the system: job preparedness. Said Hill, “The POS system is used, or will be used, at a lot of restaurants, so by training our kids on it, they’ll know how to use it in the field, whether they’re in the ‘front of the house’ or the ‘back of the house.’”

“When the foundation could facilitate the purchase, we thought it was great that the kids could use real-world technology that they’ll be using out in the industry,” explained DBEF President Paul Medeiros. “Whenever we can help out with projects like that, we’re going to do so. That’s why the foundation was started.”

The technology may be new to the field, but it’s yet another example of Diman’s shops staying ahead of the curve. Said Sawejko, “Even in the fanciest of restaurants that I’ve dined at, nobody has this technology that has a waiter or waitress take your order right there with a tablet. It’s the cutting edge of technology.”

While the gee-whiz “Jetsons” aspect of the tech is great, it’s the practicality that the students like. “It’s a lot easier to use than the old system,” said senior Chelsey Benoit, of Westport. “It’s much simpler to send orders back to the kitchen, find items, take credit cards, split checks… it makes my job significantly easier.”

Diman Bengal Educational Foundation board members and Diman school officials gathered at the school on November 12, 2015 to announce the Foundation […]

Recently at Diman Regional, a ribbon cutting ceremony was held to dedicate the newly built dining terrace that is connected to the […]